New Program: Get Your Writing Done: Starts 7/9! Click to Find Out More

Scott funded his book through a Kick Starter campaign

Years ago, photographer Scott Indermaur told me of his dream of putting his photographs from the REVEALED Project into a book. Not easy getting a publisher for a photography book in this competitive market and economy.

And, of course, self publishing a photography book full of photos on high quality paper  is a much more expensive endeavor than self-publishing a how-to book.  So, that seemed out of the question, until Scott discovered KickStarter and put together his own funding campaign to underwrite the project and make his book a reality.

Last fall I received the request that went out to Scott’s entire list–and subsequently many of our friends–and I “invested” in his book. In fact, I will soon receive my free copy now that the book is fully funded. How exciting to be one of the people in this grassroots movement to get this inspiring book out there.

One of my favorites of Mimi's sculptures

Dylan Howard, who is filming a documentary about my mother-in-law’s art and her work for peace–Anne Mimi Sammis, painter, sculptor and host of PBS-TV’s Love to Paint with Mimi discovered Indie Go Go as a similar fundraising site for the arts. The documentary, which is being filmed in conjunction with PBS-TV in RI, has raised about 34% of its funding goal.

You may remember Mimi from the beautiful image of her painting of birches in winter that I sent out in my e-holiday card. Perhaps you’ll join me in supporting this project or another. And if you’re looking to fund your own project, check out KickStarter and IndieGoGo which make it easy for community to gather together and help you make your dream come true–and create the impact you know you can make with your book, film or art. 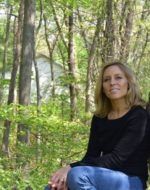