My colleague, Success Coach Kate Beeders is a genius at helping people break through 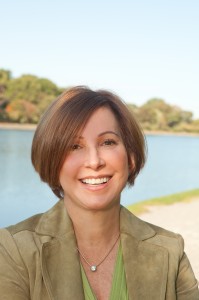 blocks—something that can plague aspiring authors. If you’ve read my posts from last year, you may have seen my interview with her on making money as an author.  Here, I interview Kate about the main fears that stop aspiring authors in their tracks—even those who have already published.

Lisa: Many people are stopped by fear of failure. How might you work with someone like that?

Kate: I’d like to break that down into 3 steps:

Lisa: Many bestselling authors use tapping. I’ve heard Jack Canfield recommend it. Can you explain tapping for those  who are unfamiliar with it?

Kate: Tapping is a powerful technique where people “tap” on parts of their face and upper body with their finger tips while saying certain phrases that I give them.  It sounds goofy, and having come from Corporate America, I definitely thought it looked silly, but I’ve never seen anything or heard of anything that gets the results that this technique does.  Every time someone tries it and sees their changes, there’s another convert into the world of tapping.  It’s been used with hundreds of thousands of people worldwide to help them release all sorts of fears.  This technique is able to work very quickly, powerfully and gently and get lasting results.   Once the fears are released, I help people replace those negative thoughts with positive ones, and my clients are quickly able to get into action and achieve the success they want.

Lisa: Thanks for breaking that down into such a detailed answer. Kate, often, the same people who fear failure also fear success. How do you help people overcome that?

Kate: It would be the same process as the fear of failure except that the fears would be different, such as:

I encourage readers of this blog to ask themselves, “What are all of the good things that will happen once I write my book?”  Some wonderful results, would be:

Lisa:  I can attest to that. Just one example, a recent Bring Your Book to Life Program graduate just published her book this fall and within weeks was invited to be keynote speaker at a dance therapy conference in Hawaii. But go on. Before benefits we were talking about fears…

Kate: Our subconscious mind is very powerful and it holds all sorts of fears, some real and some perceived.  These fears will cause a person to procrastinate, which is why many people start to author books and can’t get past “Chapter 3.”

Lisa: How about someone who’s specifically experienced an authority figure–parent, teacher or other–who told them they can’t write or “children should be seen not heard” or who somehow taught them not to express themselves. How do you help people break through that kind of block?

Kate: Lisa, I’m so glad you mentioned that.  I’ve helped so many clients that heard things like that as a child and now find it very difficult to “shine their light” and put themselves out there.  As a child, to be good, meant to be quiet, well-behaved, basically blend-in to the scenery, so it’s a huge conflict now as an adult, to write a book and then promote it.  By doing that, the author would make themselves very visible, the opposite of being “seen and not heard.” Through tapping and other mindset techniques, I help my clients reprogram their subconscious beliefs, since what they were told as a 4-year old child does not apply to them now as a 30-40-50 year old adult.  If they stay quiet and keep that book inside of them, they won’t be able to get their message out to all of the people that need to hear it.

Lisa: Kate, thanks for sharing these tips. And for our readers, Kate has a workshop coming up: Quick Cash Infusion Workshop:  3 KEYS to ACCELERATE Your CASH, CONFIDENCE and RESULTS on Friday, Feb 22  3-5pm in Newton, MA Click here for more info!

Stephanie called me yesterday to share this story and the magic of it blew me away.

Stephanie and I had talked earlier in the week because she felt drawn to my Bring Your Book to Life® Program as a way to complete her book after three long years of occasional joy—and often struggle.

If you know me, you probably know that rather than “sell” my program to people when it may or may not be the optimal fit for them to bring their book into the world, I lead them through a process that takes them to their inner wisdom so they get complete clarity—without my ego or theirs getting in the way.

I call these visualizations “Meet Your Muse” and often, as in Stephanie’s case, the muse says, “Yes, this is a perfect fit for you,” and “Yes, the timing is right,” while money—or lack of it—seems to block the path.

The muse says, “Trust,” but neither of us has any idea how the money will come. In Stephanie’s case, her muse showed her a money jar, like the ones all over her house. We both thought the image a bit wanting.

“Tell your muse you don’t see how that will make a difference,” I offered.

Her muse instructed her to check the money jars and search around the house—she’d find more.

“Enough for the class?”

“You’ll find more than you expect. And check your bank account, too,” this inner voice confirmed.

Feeling excited about the possibility of the class and finally completing her book, she dutifully followed instruction the next day. In addition to her change, she found several uncashed checks and an unopened envelope from the Canadian government which provides a $100 check each month for citizens with dependent children.

To Stephanie’s surprise, though, the envelope contained a letter saying her company had been audited for her 2010 taxes and had overpaid. She found a check enclosed for $900—a windfall, but would it be enough?

Her trip to the bank also revealed more money than she expected. In fact, although she imagined joining my Bring Your Book to Life® Program would preclude her from taking a $300 class with a Peruvian Shaman two weeks hence, her cash on hand came to exactly $300 over the amount needed for my book writing course.

You might think “coincidence” or “This can’t happen for me.” I’d like to point to both some scientific evidence for such mini-miracles as well as a couple more examples that tell me that when your desire and belief/trust is strong enough, you truly can manifest with ease.

Evidence first: How could Stephanie “know” she’d find the money around her house (and a check that was so unexpected)? As an MIT grad, I look for evidence for things I know deep inside to be true. Quantum physics tells us that time is not linear. We have access to the future. The scientific and medical research at HearthMath Institute and other research also points to our ability to access information beyond our 5 senses. The US and Russian military both use such skills in remote viewing as do police in missing persons cases.

We can all “tap in.” Two more stories:

This summer, “Janet” received my newsletter with an invitation to book one of four exclusive VIP days to work deeply with me on some aspect of their book. Janet saw herself working with me in this inspiring spot on the ocean and knew she would do it.  She just had no idea how.

Rather than focus on her lack of money, she saw herself working with me and mentioned it to a good friend. Her friend took out a checkbook and wrote a check for $2,500, promising the other $500 to follow.

Not a wealthy friend—a hard working friend who’d saved up just enough and jumped at the opportunity to give back to this friend who’d accompanied her through a health crisis, supplying love, rides, rose essences and healing massages.

Pat Hastings, author of the award winning Simply a Woman of Faith, also had no idea how she’d pay to work with me, but kept hearing in her prayer that it was the right step.

When she checked her bank account, she found over $1,000 extra—money her employer had direct deposited for an award she didn’t even know she’d won.

Have you had a magic money moment? Please do share it here.

If not, could there be some magical money waiting to be discovered for you? If there’s something you deeply want that it could buy, I’m sure there is. Your job? To unleash that magic. Here are 4 action steps to do that—and you don’t even need to do all four.

2. Spend time every day picturing yourself finding the money and experiencing the dream. How does it feel? Keep recreating that feeling.

3. If you’re looking to manifest money for my Bring Your Book to Life® Program, email me to schedule a short, free call where we’ll ask your muse for guidance. I’ve seen money appear many times this way. Your muse will generally confirm whether my book writing course is an optimal fit for you and, if so, next steps to make it possible—including finding the money.

4. Take the steps your muse advised.

5. Return to this blog to share your breakthroughs and results.