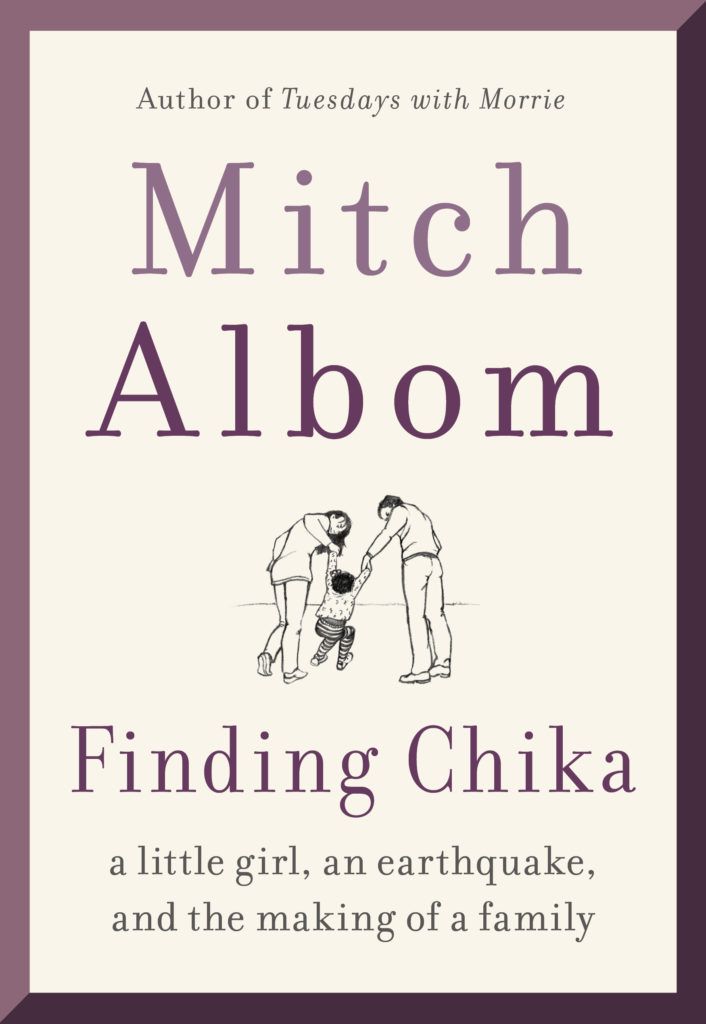 When it comes to telling a story, whether fiction or memoir, Mitch Albom is one of the most effective writers I know of. If you’ve ever read anything by him, you’ll know why it thrilled me to interview Mitch for Jewish Rhode Island. Mitch’s books have such heart and soul.

Mitch’s new memoir Finding Chika is one of those rare books that you finish and know that you will be carrying the characters—in this case real people—around in your heart for life.

I had so many questions for Mitch about his new memoir, Finding Chika: an Earthquake and the Making of a Family  that it wouldn’t all fit in one blog post! So, here on my site you’ll learn about the writing process of the author of the bestselling memoir of all time (Tuesdays with Morrie), an author who’s sold over 40 million books worldwide to date! Mitch shared details about his process for how to tell a story, discovering the starting place, finding the voice for a particular book, and the thinking behind his writing decisions.

You’ll find the rest of my interview—about Chika’s influence on Mitch’s life, the role of faith in his journey and how to “revel in the funny business” in the midst of life’s biggest challenges—at the Jewish Rhode Island website.

Mitch Albom: I figured, she’s really in heaven now, as I believe she is. Language isn’t a barrier anymore and I also wanted to be able to tell the reader the story and not the way you might tell a six or seven year old. It made sense to shift: If you really can understand everything I’m saying, I’ll speak like a grownup.

On Finding the Voice

Lisa Tener:  And how did it develop to tell a story in three distinct voices, to Chika, to the reader in the reading present, and to the reader but going back in time?

Mitch Albom: I felt that there are three parts to making a family member – you, me and us, us being what happens when you and me come together. I thought, as I shift between perspectives, I would call it you, me or us.

Lisa Tener:  It’s hard to pull off three distinct voices or points of view, from the same narrator. Yet it seems seamless in your hands. Did that take a lot of work to place things or figure out which of the three voices it was in?

Mitch Albom:  It wasn’t difficult. I could shift around to perspective. When I though it worked better addressing her in second person, I would do it that way. When it felt more historical, I’d tell it in the first person.

Lisa Tener:  So, telling the story this way was intuitive, organic.

“How Do I Tell This Story?”

Lisa Tener:  Chika helped you slow down and see the miraculous in the ordinary. How did that impact you as a writer?

Mitch Albom:  Well, at this stage in my career, I sort of know how I want to tell a story and the different ways I have at my disposal to tell a story. It’s more about, “Which method am I going to choose for this particular story?”

So it was , “How do I tell this story? What tone I want to take. Do I want to use flashbacks?”

I’ve written about a lot of themes of this book in my other books, like Tuesdays with Morrie– life and even death. But writing about a child, how a child talks, how a child looks, how to describe her, impressions, how to get across to readers how she sounded…it’s easier to play a video.

“I Had to Get Personal About My Own Story.” 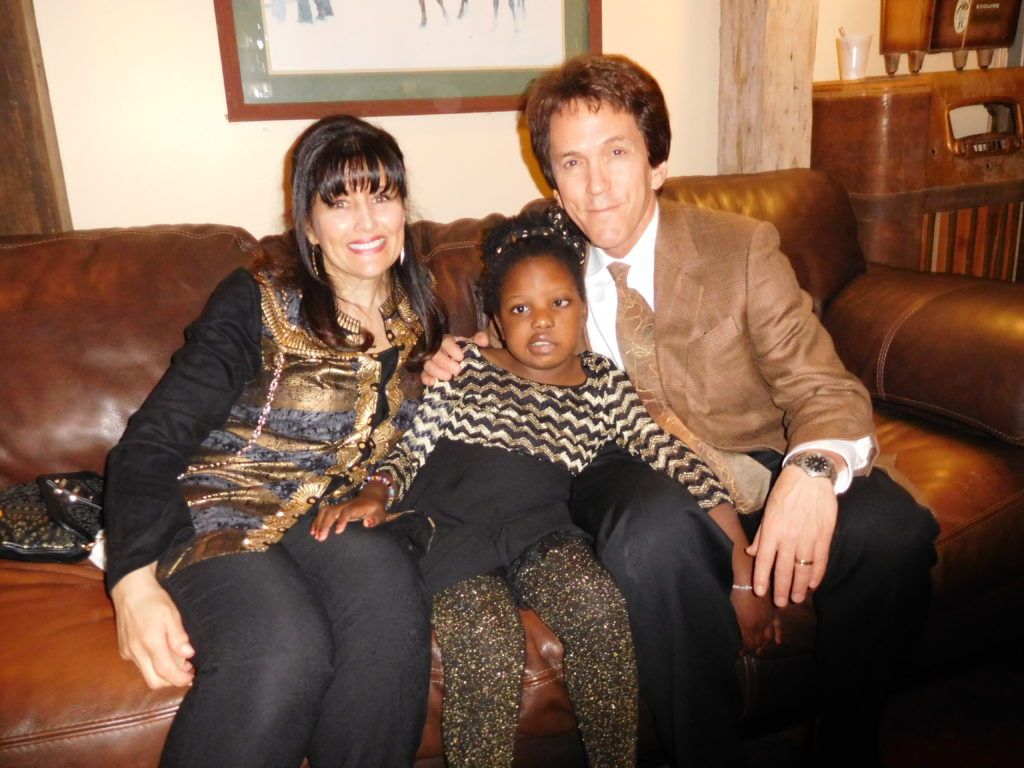 Lisa Tener:  It seems Chika is the heroine of this story; yet she is also a muse. Would you say you have an experience of a muse when you write each book?

Mitch Albom:  No. This was a very distinct book—a conversation between sort of a father and his daughter. Though we were not father and daughter, it’s the closest thing I can relate it to.

I had to get personal about my own story. The way a father speaks to his daughter is different from how he speaks to a business associate or a friend over dinner.

This was a unique voice I had to settle into, and then let the world in on our conversation.

Lisa Tener:  Chika directs you to write the book to her—to tell her story to her. Did that make it easier or harder to write? Is that how you started or is that something that developed later?

Mitch Albom:  No I foolishly dove right into it. As I wrote in the book, I made myself physically sick towards the end. I thought I was having a stroke at times but I felt so anxious about getting the story right, it was causing panic attacks.

I’ve loved many of Mitch’s books—Tuesdays with Morrie and The 5 People You Meet in Heaven are two of my favorite books. Finding Chika tops the list!

Read the rest of the interview at Jewish Rhode Island for Mitch’s deep sharing about what he learned from Chika and the other children at Have Faith Haiti orphanage, the role of humility in accepting our limitations, coming to terms with the adversity children sometimes face, and the ways his experiences with Chika and the other children have informed his faith and opened his heart.

Join Mitch Albom on November 21 at Temple Beth-El, Providence, an event hosted by Reading with Robin’s Robin Kall Homonoff. General admission tickets are $40 per person and include a book; VIP tickets ($100) include noshes, meeting the author, and a copy of Finding Chika.

All proceeds from the event, as well as all of the author’s proceeds from sales of Finding Chika, go to the Have Faith Haiti Orphanage in Port-au-Prince. So, buying a few extra copies as gifts makes it the ultimate gift that keeps giving!

Mitch Albom is a bestselling author, screenwriter, playwright and nationally syndicated columnist. The author of five consecutive #1 New York Times bestsellers, his books have collectively sold more than forty million copies in forty-two languages worldwide. Tuesdays With Morrie, which spent four straight years atop the New York Times list, is now the bestselling memoir of all time. Four of Albom’s books, including Morrie, The Five People You Meet in Heaven, For One More Day, and Have a Little Faith, have been made into highly acclaimed TV movies for ABC. Oprah Winfrey produced Tuesdays With Morrie, which claimed four Emmy awards including a best actor nod for Jack Lemmon in the lead role. Albom has founded six charities in and around Detroit, including the first-ever twenty-four-hour medical clinic for homeless children in America, and also operates an orphanage in Port-Au-Prince, Haiti. Albom lives with his wife, Janine, in metropolitan Detroit. 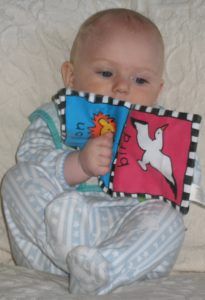 Can you tell a story?

I recently read a book proposal for a client’s book that’s been a couple of years in the making. I’m so proud of him.

He had the right instinct for his overview—telling a compelling story from the get-go. Yet, it started out dry, clinical, like many proposals I read on the first pass. I knew he could do better.

I waved my magic wand on a description of his son’s remarks and—ta da—a generic description became dialogue—four simple words in double quotes. Another wave of the wand and—ta da da—the dialogue floats from the end of the paragraph to the very first line.

All right. We can hear his son’s voice from the very first sentence. We’re hooked. What next?

I ended the brief quotation with a name and the son’s age. Let’s picture him. I suggested a few quirky details to bring this young person to life—his posture, his walk, his unusual clothing.

Now, the author can make his point. The story isn’t much more than a paragraph but it draws us in, comes alive, has its quirkiness, feels real.

Engage your reader; doing all the work for her distances her from the action. Rather than spoon feeding readers—in this case agents and acquisitions editors—a conclusion, strong writing helps readers draw their own conclusions.

Anecdotes in a how-to, self-help or business book may be short, but they need vitality to resonate and keep your readers reading.

You can certainly read successful how-to and business books to find examples of well told, yet brief stories. Yet, I also encourage you to read fiction and memoir. These master storytellers can help you go deeper with your writing and have a greater impact on your readers.

The more you read, the more your subsconscious can draw upon the great writing you’ve read.

The following creative tools can help you tell a story in a dynamic way:

Metaphor: In one of my favorite posts of all time, When You’re Sad You Make a Rainbow and Other Writing Secrets, I share how my son’s stream-of-consciousness metaphor can teach us how to discover metaphors and symbols that heighten our writing. And, yes, I tell a story.

Dreams: In this interview, dream expert Kari Hohne teaches us how to access our 24 hour mind for writing and inspiration, particularly through our dreams.

Creative Visualization: If you’ve been reading my blog for a while, you’ll be familiar with my “Meet Your Muse” exercise to access your creative source for answers to your book writing questions. Ask your muse for a metaphor, a story, a description, how to start with a person you know and bring them to life on the page. You can access your muse through this free creative visualization for writers.

What are your favorite tools to make your writing vibrant and real for your readers?