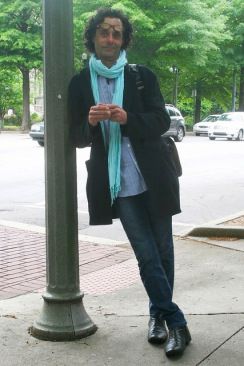 Last year, my colleague, the hyper-creative, witty and multi-talented Greg Miller, told me he was working on an ebook and asked if he could share an article I’d written as a resource in it. I was flattered, of course, and curious. Recently I had a peek at the book – and it is more inspiring, brilliant, practical and playful than I even imagined when he first shared the idea.

Now, Miller’s Compendium of Timeless Tools for the Modern Writer is written and soon-to-be-available. Since Greg’s Kickstarter campaign started Saturday , I thought it the perfect time to share this rich resource with you–give you a chance to pre-order this gem of a book, or even become a higher level sponsor with a number of great perks. As a writer, you’ll want this ebook on your virtual shelf for sure!

Lisa: What inspired you to write Miller’s Compendium of Timeless Tools for the Modern Writer? What particular needs did you have as a writer that weren’t getting met with the books that were out there?

Greg: I love books about writing. I’ve read a lot of them and most contain useful information and inspirational perspectives, but I found that I wasn’t actually using any of them during the writing process itself. It was hard to apply the ideas without going through the entire prescribed system. I’d try to remember the most useful tools and techniques, but they’d get buried in books or scattered online, along with all the other great advice given or quoted in blogs and articles – and where is it when you want to refer to it? You have to remember what it is and go try to find it again. Also, many books lay out a wholistic integrated system for writing a book or script – or a particular genre of book or script – but tend (with notable exceptions) to downplay or omit reference to any other formulations.

But I’ve found that there’s not one way to write a book or script, there are many. My philosophy has always been, ‘Collect them all!’, so I nominated myself to do it.

Lisa: How do you envision readers using Miller’s Compendium? 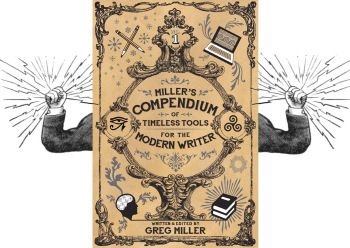 Greg: Many people will probably use the Compendium the way I’m already using it in my writing. I’ve used Aristotle’s Elements of Complex Plots to develop storylines. I’ve used Vonnegut’s Axis to chart the protagonists’ story arcs. I’ve applied specific narrative techniques from Patricia Highsmith and Parker & Stone (of “South Park” fame) to plot developments and I routinely use several outline techniques (out of twelve listed in the Compendium). I’ve also browsed it for additional perspectives, prompts and brainstorming ideas.

You could also use the Compendium as a guide to the writing process itself, since it include tools for every step of creating a book or script, from initial concept, through outlining, drafting and revising.It’s also a great teaching tool. I’ve already used it to introduce new writing concepts to clients and students, and it would work as a text for almost any kind of course on writing. It offers a much broader range of approaches, and a greater array of specific tools, than has ever been collected that I’m aware of.

Lisa: Wow, that is so exciting. You know you have a winner when it’s already becoming so useful in your own writing process. In addition to the articles you’ve mentioned, what’s in Miller’s Compendium?

Greg: What isn’t? Actually, I edited out a lot, but I’ve included all the most useful tactics, categorizations, formulas, devices, guidelines and techniques for writing I could find. Most of the resources apply to any kind of writing, but many articles and links apply to specific forms or genres too (non-fiction, crime, fantasy, commercial movie formulas and practices, etc.).

Once the nature of the book became clear, I tried to make it as definitive and comprehensive as possible. At the very least, the Compendium will give you a great jumping-off point to go deeper with any kind of writing. It’s also full of cool vintage graphics.

Lisa: Who is it written for?

Greg: The Compendium is for writers of any form or genre with any level of experience. Screenwriters. Novelists. Non-fiction writers. Journalists. Librarians. Teachers. Historians of writing. Reference book afficiandos. Vintage graphics enthusiasts.

Lisa: Was it daunting to decide what goes in? How did you decide what to put in the book and how to organize it? 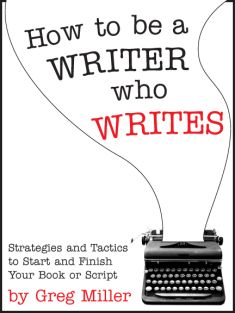 Greg: It took years. I originally thought it would be the Appendix to my first book, How To Be A Writer Who Writes, but the Compendium quickly took on a life of its own. It’s been organized and re-organized several times. At one point I had the entire dining room table covered with 1/4, 1/2 and whole index cards (representing chapters, articles and links) – and that was just one of three sections!Utility was my prime directive, and it’s reflected in the overall structure of the book. In my experience, most writers develop Story and Concept first, so I put that section first. Then Character, which could have gone first. Then I had a lot of other material that related to Process, the part where you actually get the thing written. The writing.

As a teacher and producer, I’m very process-oriented, so that section includes chapters about the practice itself, including Creative Cycles, issues of Drafting and Rewriting, Legal Issues and useful advice from other fields that are ‘outside the box’.I really tried to make sure everything I included was practical. I tried to include every essential writing reference, but I’m also eclectic by nature so I also included a lot of eccentric articles and links – but always with practical application in mind. Will it help writers write?

Lisa: I love the way you used graphics in this book–using old fashioned 19th century newspaper type ads. How did that idea come about? 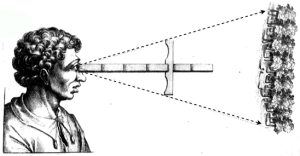 Greg: Thanks. I love the graphics (I say with all humility, because I didn’t make them). The book was originally just text. “Yes, but…” said a friend of an early draft, “it has to look like something.” Of course it did! You can’t just have page after page of words and lists, no matter how well organized. I started thinking about how to make it look like something – and what that something should be.

Around the same time, another reader commented on the ‘timeless’ nature of the material and that got me thinking more deeply about historical context (and led to the subtitle). I couldn’t really afford a budget for extensive art work, so that got me thinking about public domain graphics. That led me to start exploring the vast online treasure fields of public domain images (from the 19th century and earlier). It’s mind-boggling what’s available now. Open source. Public domain. That led to additional months of research, selection and editing hundreds of images that ended up in the book (all linked to their online sources).

I think they illustrate the content in inspiring and illuminating ways – and represent the ‘timeless’ perspective of the Compendium. Plus, most of them are from the late 19th century – an era smitten with technology. I find their optimism, specificity and metaphorical implications really amplify and compliment the writing wisdom of the ages.

Lisa: You have an innovative kickstarter campaign that includes the ability for donors to place ads at the back of the book. I could see how something like that, not executed well, might seem cheesy, but the way you have done it–with period-design ads that match the overall design of the book makes it classy and appropriate. Can you say more about how you came up with the idea? 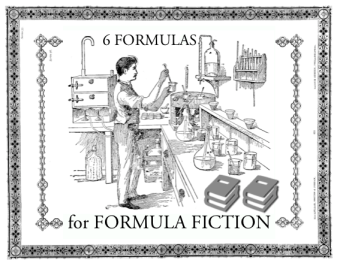 Greg: I found so many brilliant graphic ads while researching the Compendium, I wanted a way to share those too. A lot of the ads are for writing supplies; typewriters, ink, paper, pens and pencils – when their artistry was arguably at its height, and graphic art itself was flourishing, so they’rebeautiful. And most of them celebrate the tools writers used then and still use today, so they’re inspirational.Lots of old books (and catalogs) included advertising supplements, so it was natural to create one in the Compendium where I could showcase the vintage ads.

At the same time, I was looking for a higher level backer reward. I realized I could offer vintage-style ads to modern sponsors and let them reach an elite audience of early-adopting tech-savvy forward-looking writers and fellow travellers.

Lisa: How much do you hope to raise with your Kickstarter Campaign and what do those funds go towards?

Greg: The funds are for the actual direct production costs of the First Edition e-book.The campaign goal is $5600. That’s $600 for the (amazing!) cover, $1200 for a professional copy edit, $500 for Kickstarter fees and $3300 for production layout, programming and production of the e-book (for epub and mobi). The Compendium is big and it has a lot of external and internal links that each have to be individually programmed and triple-checked for all formats. Production of an e-book of this complexity is what costs. You can’t just run it through Smashwords. You can find all the details on kickstarter.

Lisa: Anything else you want to add?

Greg: I hope the Compendium will be a hardcopy book one day too, but first and foremost, it wants to be a clickable, flowable, searchable e-book. That will unleash its full power, to help more writers write!